At the 2015 Frankfurt Motorshow, Audi unveiled the fifth generation of the compact-sedan vehicle A4.

Along with the rest of the range, it also showed the S4 version.

From the outside, the 2016 S4 featured the big singleframe grille and a pair of headlights that resembled those on its bigger brother, the A6. The car was aerodynamically enhanced so the drag coefficient dropped to 0.23, which was the best in its class in 2016. The exterior mirror housings in aluminum look were a visual highlight on the clear flowing sidelines. The S4 featured a different bumper and apron design. In the back, the four-round exhausts were placed on the sides, in pairs. A subtle lip-spoiler was installed on the trunk.

Inside, the S4 featured sport-bucket seats upholstered in Nappa leather and Alcantara. Black was the main color, as in any other Audi S-version. The technical innovations included the Audi Virtual Cockpit as well, which replaced the traditional dials with a 12.3” screen in the instrument cluster. Another innovation was the MMI interface, which was inspired by smartphones, including the free-text search function. The 8.3” monitor for the system featured the navigation function as well.

The most important part of the S4 was the engine. It was a direct-injected, and turbocharged 3.0-liter V6 unit. It was mated to a standard 8-speed tiptronic gearbox with a torque converter. As usual for any S-version, it was an all-wheel-drive traction system. A sport rear differential was on the options list. 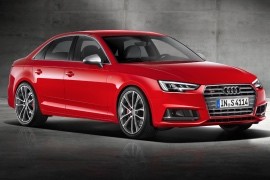 1 Audi A3 Boldly Drag Races an R8, Retaliation Is Swift

3 High Mileage Audi A4 Cabriolet May Play Games With Your Wallet, It Might Also Be Awesome