The second generation of the Audi A3 was introduced in 2004 and it took another two years for the S3 version to be launched.

In 2008, the entire range went through a mid-life cycle refresh.

The S versions for Audi started with the S1 rally-car in the '80s. From then on, all the S-models featured two main common attributes: turbocharged engines and all-wheel-drive systems, named Quattro.

The 2008 Audi S3 was offered with 3- and 5-door versions. The restyled model featured a new front fascia with the singleframe grille. Unlike other A3 models, the grille was designed with seven vertical silver bars. The same number of LEDs were installed in each headlight for the daytime running lights. From the side, the aluminum look of the door-mirrors was a standard feature for any Audi S-model. Despite sharing the same platform with the same wheelbase, the Sportback (5-door) version was longer by 70 mm (2.75”).

Inside, the S3 featured standard sport seats, but a pair of bucket-seats was available from the options list. Aluminum pedals, three different styles of inlay, and a black or silver headlining created an exclusively sporty look. Depending on the body version, the rear seats offered more or less headroom.

The engine was 2.0-liter gasoline. It featured a turbocharged and direct-injected fuel system, which made it more fuel-efficient, and more responsive as well. It was mated as standard to a 6-speed manual and a 6-speed automatic (dual-clutch) was offered as an option. The all-wheel-drive system was standard as well. 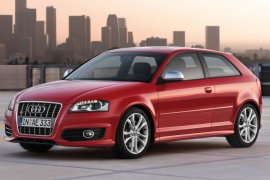