In 2006, Audi introduced the second generation of the S3 version.

It was available as a 3- and 5-door version. It was the most powerful hot-hatch on the market.

Audi started the revolution of permanent all-wheel-drive back in the '80s when the first Audi S1 Quattro was introduced to the rally stage and take victory after victory from its opponents. Since then, all the Audi S-models were with all-wheel-drive and the S3 was no exception.

From the outside, it looked almost like a regular Audi A3, but few clues could tell the difference. The front single-frame grille was surrounded by a silver rim. The aerodynamic package was different and the door-mirrors were silver as well. In the back, a roof-spoiler enhanced the aerodynamic flow to the back. Under the bumper, two tailpipes were discretely showing their presence.

Inside, the S3 was fitted with sport-bucket seats in the front. The pedals, gear-knob, and air-vents were made out of aluminum. The red and silver S3 badge was found on the leather seats and the steering wheel as well.

The powerplant was a 2.0-liter gasoline engine featuring direct fuel injection and a turbocharger. It could boost up to 1.2-bar of pressure (17.4 psi), which was unusual for a production vehicle. Power went to all four wheels via a 6-speed manual fitted as standard and a Haldex center differential. 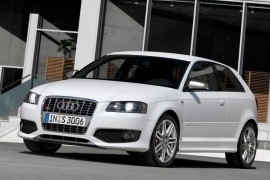