This sportier version on the Audi A3 shared its A platform with cars like Audi TT or Seat Leon and was fitted with a 1.8L turbocharged petrol engine delivering 210-bhp. This de-tuned variant of the Audi TT engine later received a power boost of 15 bhp through a new variable valve timing system. New features included an electronic traction control/stability program, xenon headlamps, climate control, optional cruise control and heated front seats. The entry-premium Audi S3 received its first - and only - facelift in 2001, when it underwent some slight changes on its front and side design. 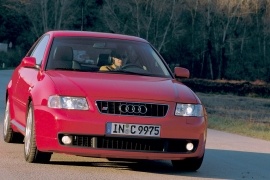