1 Audi e-tron Loses Its Battery Pack During a Collision, Hinting at Structural Problems

Audi made the RS7 for those who didn't want the RS6, which was available only as a station wagon, and the result was a supercar dressed as a fastback, four-door coupe.

The A7 was the four-door (actually five) coupe of the A6. They shared the platform, drivetrains, and powerplants. Audi made that shape to compete with the BMW 6-Series Grand Coupe and the CLS from Mercedes. Its strategy worked, but when an M and AMG improved the other two German premium carmakers lineups, Audi had to answer properly and introduced the RS version for the A7 resulting in the RS7.

With its modified front fascia, which sported a honeycomb, singleframe grille, and the wide functional scoops on the lower apron, the RS7 was not as subtle as the RS6 Avant. Unlike its sibling, the S7, which sported silver door mirrors and A-pillars, the RS7 had these elements in body color. At the back, the carmaker added two large oval exhausts.

Inside, it wasn't as subtle as on the outside. The carmaker added the RS7 badge inside the tachometer dial, on the steering wheel, and embroidered on the front seats' seatbacks. Its dashboard, center console, center stack, and door cards featured a carbon-fiber trim, which amplified the sporty sensation of the nearly two-ton monster. Despite being a fierce highway runner, it was practical as well. Its 60/40 split-folding rear bench increased the trunk volume from 535 liters (18.9 cu-ft) to 1,390 liters (49 cu-ft).

Under the hood, the carmaker installed a 4.0-liter twin-turbo powerplant paired to a standard eight-speed automatic gearbox. Its all-wheel-drive system featured a sport rear differential. The RS7's customers could opt for the standard air suspension or a classic, metallic one with adaptive dampers. 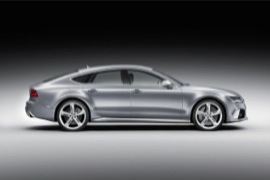