Along with the e-tron GT, Audi introduced at the beginning of 2021 a sportier version, named RS, that could blow away an RS7 at any time.

Being part of a larger group, Audi benefited from a common research database, which Porsche used to develop the Taycan. And that helped the German carmaker from Ingolstadt introduce a sportier version of an already fast sports sedan, the RS e-tron GT.

Just by looking at an RS e-tron GT was difficult not to think about the Taycan, which was not a mistake. They both shared the same idea of a sports sedan with a GT aura around them, and both were flat and wide on the road. The RS e-tron shared more parts with its non-RS brother and featured the same singleframe grille, which was almost useless. There were only a few gaps at the bottom of it to help to cool the electric system. The side vents were needed to create a flowing draft and help the car reduce the drag on the sides.

Inside, Audi didn't mess with cheap materials and installed only the best it had. As expected, the instrument cluster was filled with a 12.3" Audi Virtual Cockpit screen. The MMI (Audi's infotainment system) featured a 10.1" display on the center stack surrounded by a piano-black trim. The carmaker made the sport seats covered in two types of leather. There was room for four adults inside.

From the technical point of view, the RS was more powerful than its non-RS e-tron GT version. It still featured the same 800 volts architecture and an 85 kWh battery pack, but it was powered by a two motors system that delivered 598 hp (440 kW). Like it sibling, the RS featured adaptive dampers and all-wheel-steering. 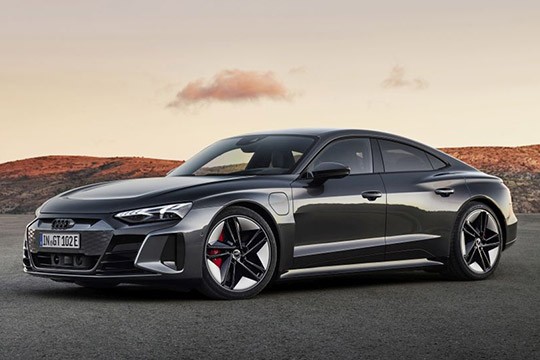