Audi dropped the cover for the RS3 Sedan in July 2021 and it was fast enough to put some supercars to shame and threaten other performance vehicles of its days.

The German carmaker already had vast experience in producing powerful, agile vehicles. It was the first carmaker to provide a powerful version for a sporty, compact-segment, premium car in the form of the S3 back in 1999. But, while its ancestor provided just 210 horses, the 2021 version came with almost twice as that.

With a look that resembled those from renderings and mad tuners around the world, the S3 Sedan was a clear sign of revolution for Audi's compact sedan. At the front, its broad and black singleframe grille abandoned the small hexagonal design of former models and sported wider oval-shaped adornments. Its Matrix-LED headlights wore a new pattern for the daytime running lights. From its sides, the wheel arches were wider than on the regular A3 Sedan, and its sculptured door panels completed the side image. Unlike any other S-line package, the RS3 featured body-colored A-pillars and black door mirrors. At the back, a discrete lip spoiler adorned the trunk lid, while on the lower side of the bumper, the design team installed a diffuser flanked by a pair of oval exhausts.

Inside, the sport bucket seats provided high bolstered areas needed to keep their occupants in place while hard-cornering. In front of the driver, Audi installed a fully digital display in the instrument cluster and a second display for the MMI (multi-media information) infotainment system. The rear bench was profiled for two but featured three headrests.

Under the skin, Audi installed a 2.5-liter inline-five engine that provided 400 hp sent in all corners via a seven-speed automatic (dual-clutch) gearbox via a Haldex all-wheel-drive system. 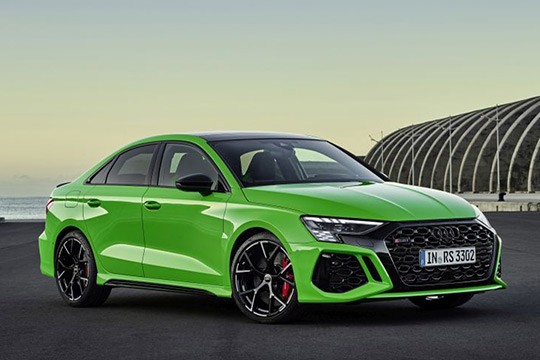