Audi introduced a mild facelift for its mid-engined supercar in 2012 and made it quicker thanks to a new, seven-speed automatic gearbox.

The R8 was Audi's flagship among its sports cars. It was a proper supercar developed together with Lamborghini. Worth mentioning that Audi owned the Italian brand, and it shared some parts with it. And that's how the Italian supercars got more reliable and how the Audi made a big step away from the bland look.

From the outside, the 2012 model was enhanced and featured standard full-LED headlights and taillights. At the front, the single-frame grille with rounded corners at the top was a big statement for the brand's image. Audi installed a pair of big side-scoops to cool the brakes. On its side, behind the doors, the carmaker installed functional air-intakes for the engine. A carbon-fiber panel enhanced the car's look, creating a visual distance between the cockpit and the engine bay.

Inside, Audi brought more comfort and luxury items than on the non-facelifted version. A pair of carbon-fiber bucket seats were available on the options list. Fine Nappa leather and carbon-fiber trims were spread around the cabin. But most of the controls and buttons were carried-over from other Audi vehicles, and that spoiled the image of a unique Audi supercar.

The carmaker placed the same V8 engine as its predecessor under the hood but improved it by ten hp. It was paired as standard to a six-speed gearbox. Starting with the 2012 model, the R8 was available with a new, seven-speed automatic (dual-clutch) gearbox. 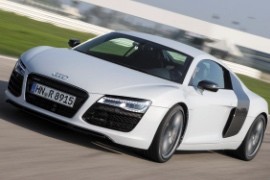