Audi may have been the last German premium brand to show a supercar, but when it showed it, they did it properly with the R8 V8 in 2006 at the Paris Auto Show.

After purchasing the Lamborghini supercar brand, Audi thought that they can build something in the same segment. They already had the engines and transmission to do it. All they need was a good platform and a bodywork. In 2003, the Audi showed the "LeMans" concept-car after three consecutive wins at the 24h of LeMans race. Based on that, the Audi made the R8 supercar. It was a light, small, coupe with middle V8 engine and all-wheel-drive.

Inside, there were numerous parts from other Audi models, which were criticized. But the car was true to its image. The 420 hp naturally aspirated engine was mated to a 6-speed manual transmission. Unusual for an Audi, it had a gate pattern for the gearshift lever, something like a Ferrari. But that didn't matter too much. The car was fast and handled very well. Unlike any other Audi, it was more rear-biased so it was prone to oversteer instead of understeer like the rest of the Audi range.

The engine was a naturally aspirated V8 and it was so reliable that it could be driven every day. It also was available with a 6-speed automatic transmission with a launch-control mode and paddle shifters behind the steering wheels. To improve stability, it had magnetorheological dampers, which could be stiffened to provide better cornering speed. 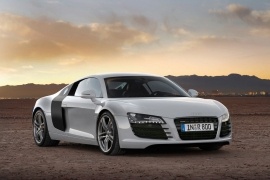