Audi introduced the Spyder version of the R8 Performance RWD in the summer of 2021 and continued the idea of offering a lighter, more affordable version of its supercar.

In 2018, the German carmaker tested the market with the R8 RWS (Rear Wheel Series) version that sent the power only to the rear wheels, removing the famous quattro all-wheel drive system. The customers reacted well, and the sales figures increased. So, the four-rings brand continued the saga of RWD cars.

In 2021, the carmaker introduced the R8 Performance RWD Spyder as an open-top vehicle that sat on an upgraded drivetrain, similar to the one installed on the coupe version. Like its stablemate, the Performance RWD Spyder received a few exterior upgrades. Overall, its bumper was the same, but there were a few details different, such as the mate-black singleframe grille, while on the sides, its air intakes from the rear quarter panels received a body-colored treatment. Last but not least, the RWD Performance version received a specific set of light-alloy wheels of 19" at the front and 20" at the rear to lower the unsprung masses.

In the cockpit, a large, sharply contoured arch ran around the driver's area, creating a "monoposto," racing atmosphere. In front of the driver, a 12.3-inch display was filled the floating-design instrument cluster. Unlike the rest of the R8 range, the Performance version offered a steering wheel with four control satellites to control the Audi drive select, the start-button, to activate the performance mode, and control the Audi virtual cockpit screen respectively.

Since it was a performance-oriented supercar, it received a new powerplant enhanced by 30 hp when compared to the rest of the range from the same 5.7-liter V10. It was paired as standard with a seven-speed automatic (dual-clutch) gearbox. 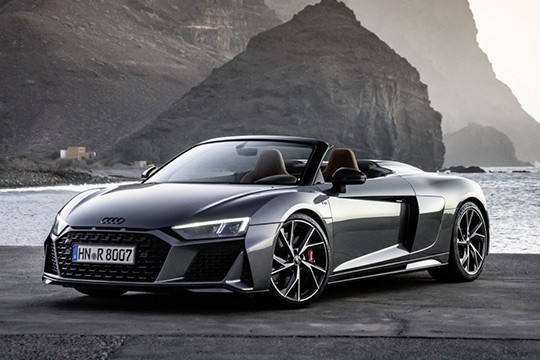