Despite having a super-car brand in its portfolio, Audi insisted to have its own super-car and, in 2006, it launched the R8, which it was followed by the second generation in 2015.

Audi claimed 13 victories at the 24 hours of LeMans race before launching the second generation of its R8 and that was as much as the Ford and Ferrari combined. It was second only to Porsche. With that kind of sporting pedigree, the four-circle brand could dare and make a bold move with the second generation of the R8. They ditched the V8 engine and manual transmissions. It was time for a new era of supercars.

With its sleek, low profile, and advanced driving post, the second generation of the R8 featured an enhanced aerodynamic profile. On the front side, the new singleframe grille was adorned on the sides by a pair of air scoops for brakes cooling. The side air-intakes for the engine were painted in black, to emphasize the mid-engine design. In the back, under the taillights, there were other air-vents to help to cool the engine and remove the air from the wheel-well.

Inside, the two-seater supercar featured sport-bucket seats and a high-tech interior. With the Audi Virtual Cockpit, the instrument cluster was transformed into a 12.3” display with elaborately computed graphics. The system also showed a shift-light informing the driver when to shift the gears, while in manual mode.

The second generation of the R8 was available with a choice of two V10 engines that offered 540 hp and 610 hp, respectively. The standard transmission was a 7-speed S tronic. 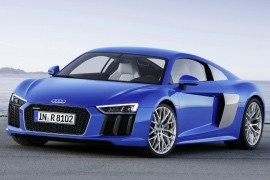