Unveiled in late 2022, the Q8 e-tron was the natural evolution after the e-tron model was introduced in 2018, but it was more than just a re-branding move.

Audi sold more than 150,000 units of the original e-tron model, and thanks to the feedback received from its customers, it managed to create an even better vehicle: the Q8 e-tron.

The standard Q8 e-tron was built as a crossover vehicle with a shape that resembled the former e-tron. Yet, at the front, a new signature light combined the DRLs inside the headlights with a new light strip placed under the hood's edge. The singleframe grille was reimagined and available in black or aluminum color. Audi placed the side scoops on the lower bumper that deflected the air on the sides. From its profile, the sculptured doors channeled the air towards the back of the vehicle to reduce the drag. Finally, an LED light stripe at the back resembled the signature lights at the front, but in red. Under the rear bumper, the carmaker installed a four-slat diffuser.

Inside, the Q8 e-tron boasted a luxurious cabin covered with Dynamica microfiber made from recycled materials. At the front, the carmaker installed bolstered seats for the entire range, with an option for leather-wrapped sports seats. Like any other high-tech vehicle from its era, the Q8 e-tron featured a digital instrument panel. Atop the center stack, the carmaker added the screen for the MMI infotainment unit, and underneath it, a touchscreen for climate control and other vehicle features. In the back, the automaker installed a 40/20/40 split-folding bench fit for three passengers.

The drivetrain consisted of a dual-motor system that provided 300 kW (402 HP) and 664 Nm (490 lb-ft) of torque sent in all corners. Audi installed a standard air suspension for all trim levels to keep the car planted on the road. 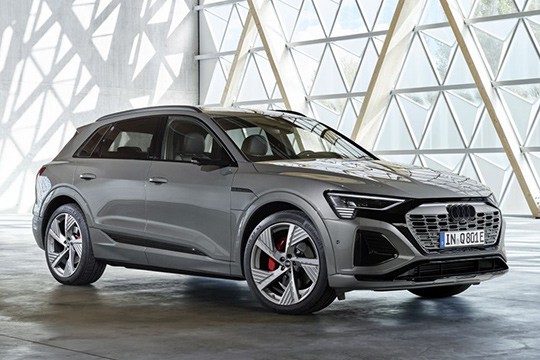