The electric revolution forced Audi to introduce new vehicles on the market, such as the 2021 e-tron lineup, which showed no mercy for its competitors.

Porsche stunned the world with the Taycan, and Audi tried to impress it with the e-Tron SUV, but its success was smaller than expected. That didn't make them quit and tried again, in 2021, with the e-tron GT, a sports sedan that could beat most supercars at their own game, as long as the game was on a quarter-mile run or not too many laps of the infamous Nurburgring Nordschleife race-track.

The e-tron GT was wider and lower than the Audi A7 and looked much better. Its headlights featured the already known Audi signature lamps and the big singleframe grille. In this case, it wasn't needed to cool the engine since there was none inside. There were only a few vents to cool the batteries. From the sides, despite the coupe-like profile, it was a four-door sedan with a very sloped rear end. In the rear, a red LED strip stretched from one side to another. It worth mentioning the standard carbon-fiber roof, which could have been traded for a panoramic glass roof. On the trunk-lid, Audi installed a pop-out spoiler that was deployed over 50 mph (80 kph).

Inside, Audi installed a cockpit that resembled a race-car idea, with the driver isolated by the rest of the car with a tall center console and a tilted center stack. There were no analog dials or gauges everywhere. There was a TFT display with the Audi Virtual Cockpit in front of the driver, while on the center stack, the MMI display surrounded by a piano-black trim took center stage. Like most of the four-doors coupe on the market, Audi installed a pair of seats in the back with low-mounted seats to accommodate average-sized passengers.

Audi installed a 175 kW (238 hp) electric motor on the front axle and a 320 kW (435 hp) in the back. They worked separately or combined to provide maximum traction and safety. 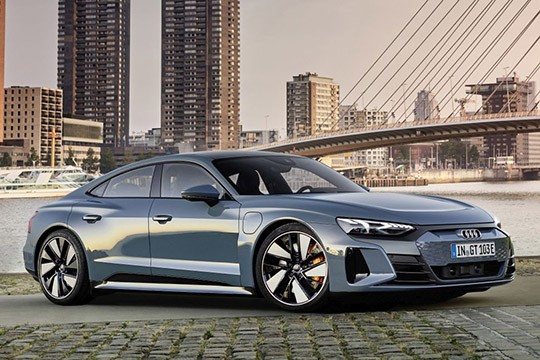