Audi showed the third generation of the A8 and A8L in Miami, followed by a full disclosure at the 2010 North American International Motor Show.

Ever since its first generation, the A8 stunned its customers with its high-tech features, light construction, and all-wheel-drive system. BMW and Mercedes-Benz were mainly rear-wheel-drive, with a few options for traction in all corners, while only one version of the A8 was available with an option for front-wheel-drive. But that was not the only difference.

The car's exterior showed more similarities with its smaller brother, the A4. Audi said that it did it that way to create a corporate image, but from the profile, the L was different. Unlike the regular model, which had similar-length doors, the A8L had the rear ones longer. That was due to the extended wheelbase by 13 cm (5.12").

But all that length was added for an impressive interior, especially for the rear passengers. While those at the front had the same toys and gimmicks from the regular model, it was a luxurious, five-star spa in the back. Above the seats, the carmaker offered an option for a sunroof. Instead of a bench, Audi installed two individual armchairs with a reclining option. On the front's seats seatback, the carmaker placed folding footrests. A console separated the rear occupants, and there the customer could have chosen a refrigerator. 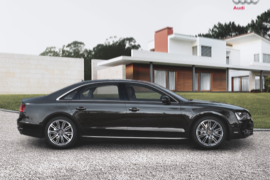