The third generation of Audi's flagship, the A8, was launched in November 2009 at Miami and in 2013 it received a facelift that added more stance on the road and more grunt under the hood.

The Audi A8 was already famous due to its appearance in various movies. The first generation starred in the Ronin while new generations appeared in Spider-Man: Homecoming and Avengers: Age of Ultron. But even hero's cars need an update from time to time. And in 2013 it was about time.

The facelift featured new headlights, named Matrix-Led. The headlamp was built by Hella and the LEDs were made by Osram. With their power combined, the final result was a spectacular flow of light in front of the car, but without side-effects for the oncoming drivers. The grille was redesigned as well. In the rear, the most noticeable detail was the exhaust tips, which was trapezoidal and not round as the pre-facelifted version. Moreover, the navigation system and the headlights computer communicated and the car could lit a curve before the driver even turn the steering wheel.

Inside, there was a new MMI (multi media interface) system for the 2014 A8. It featured an LTE WiFi modem that could offer instant access to up to eight devices. The genuine leather upholstery was standard, but for those who wished, there was a vegetable-tanned unicum leather.

The A8 facelift was fitted with a choice of diesel and gasoline engines. While all of the diesel versions were single or bi-turbo, for the gasoline units some were naturally aspirated. 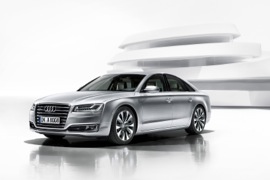