Audi's flagship car was the Audi A8 and, in 2010, its features were designed to improve the ride quality and ensure comfortable journeys on any distances.

Even if it looked like it was an expanded A4 or A6, the A8 had few details that could show the difference. But according to some Audi studies, their owners were looking for a limousine that looked like a lower model, just to go under the radar.

The exterior look started with the single-frame grille that made Audi fans go crazy around the world. They loved it. The A8's headlights were with xenon and LED, to enhance the visibility at corners and the foglights were incorporated into the main lamp. In the bumper, where the foglights used to be, there were radars and sensors. The A8 was built on the Audi Space Frame concept with aluminum body structure just to be lighter.

Inside, the luxurious A8 featured an innovative infotainment unit with pop-up tweeters on the dashboard that was open for a better sound experience. The infotainment screen was also retractable into the dashboard, to not ruin the clean lines of the design. On the center console, a touch-pad was installed to control the infotainment system. Special detail was given to the shape of the gear-selector for the 8-speed automatic transmission, that looked like a throttle for an airplane.

The A8 had engines and transmissions for all the purposes. It had a 3.0-liter V6 turbodiesel with front-wheel-drive to be used for, let's say, VIP shuttle, or a mighty 6.3-liter W12 engine. To enhance comfort, the A8 was fitted with air-suspension. 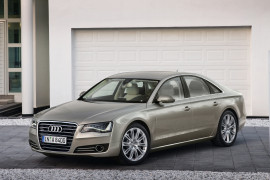