Audi unveiled the second generation of its flagship model, the A8, in 2002 and introduced it to the market later that year.

The car went through a long and costly development process due to its aluminum bodywork. The car's design was ready in 2000, and the prototype was shown in 2001 at the Frankfurt Motor Show as the "Avantissimo" concept car. But, when it came on the market, it was the lightest car in its segment.

Miklós Kovács and Imre Hasanic were the main contributing designers for the car's exterior. They chose one of four full-size prototype models. The rounded shapes and clear-cut headlights design resembled those installed on the A4 but wider. Its main grille was complemented by an additional one placed on the lower side of the bumper, under the license plate area. A set of slim and wide scoops flanked it and sported the fog lights. With a long and curved greenhouse, the A8 featured a low drag coefficient, thanks also to the sloped rear window that ended on the flat, horizontal trunk lid. Like its predecessor, the A8 featured a third window behind the rear doors.

Inside, there were four design models made before one was chosen to represent the company's flagship. Despite being an executive vehicle, the carmaker focused on the driver's area and installed all the controls close to the driver's seat. In the back, the A8 offered a choice for a profiled for two or two individual seats, depending on the options. One of the most important features of the car was the MMI (Multi Media Interface), which matched the BMW iDrive system from the 7-Series. It was also the first Audi with DVD-based maps.

Under the hood, the carmaker installed a wide engine range which started with a fuel-efficient 3.0-liter turbo-diesel and went up to the fierce 6.0-liter W12 gasoline engine. 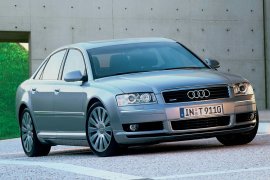