3 Audi RS Q8 Drags Mercedes-Benz GLE on Unprepped Surface, One of Them Takes a Beating

5 The Audi R8’s Future Is Uncertain, Electric Successor Under Consideration

In 2004, Audi introduced the third generation of its mid-size sedan, the A6. It was the big step ahead in the company design language that followed over the years.

Audi was struggling to find a good corporate image and the 2004 A6 showed the way. Satoshi Wada, the designer that drew the lines for the third generation of the Audi A6, imagined a big, single-piece, grille. It looked somehow like a trapezoidal shield with the bigger side up. The shape was also the ideal shape of a masculine body with larger shoulders.

Inside the vehicle, there was enough room for five adult passengers. The platform was used only for the A6, and it helped gain a big interior room, despite having a longitudinally mounted engine. The dashboard featured a newly developed infotainment unit that could have been accessed via a rotary knob and few buttons placed on the center console. It was the beginning of the Audi MMI (Multi Media Infotainment).

Under the hood, the A6 was offered with some economic, diesel, engines but also with some other powerful versions. Apart from the rocket-monster V10 RS6, the top version was a 4.2-liter V8 engine. It was offered with manual or automatic transmission, with front or all-wheel-drive. 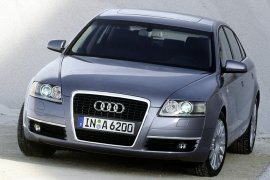