The second generation of the Audi A6 was released at the 1997 Geneva Motor Show and it was a big step up over its predecessor. In 2002, it received a facelift that improved its look and performances.

When the second generation of the A6 was introduced, most of its engine versions were considered powerful enough for it. In just a few years, the Audi marketing department found out that some of them need to be adjusted or replaced. After they gathered all the data, the modification list was done and, in 2001, the facelifted version came with all the modifications performed.

A facelift cannot be done without changes to the exterior look, or it wouldn't be noticed by anyone. Considering this, the 2002 A6 featured new headlights with clear lenses for the headlights and new design for the taillights. A new set of 17” light-alloy wheels was introduced.

On the inside, the 2002 A6 featured a revised interior. There was a sense of American luxury with the introduction of storage compartments in the door but it still needed a real pair of cup-holders in the center console. The interior designers worked to improve the look with wood trim on the dashboard and door panels.

For the drivetrain, the 2002 Audi A6 changed its base engine. The initial 1.8-liter 20valves (five per cylinder) was replaced by a healthier 2.0-liter. For the diesel engines as well the base 1.9-liter TDI unit was tweaked to offer more power. Another change was for the 2.8-liter V6 gasoline unit which was replaced by a 3.0-liter. The base versions, either diesel or gasoline, were not available with the all-wheel-drive system. 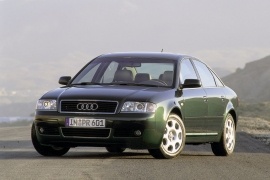