The second generation of the Audi A6 was, in fact, the first true A6 and not a re-badged Audi 100, as its predecessor.

It was launched in 1997 and it was a big leap over the previous generation.

The 1997 Audi A6 went through major changes. It was bigger and more spacious inside. It still featured a longitudinally installed engine and it was offered with front or all-wheel-drive system. The car was more comfortable than the Audi V8, which used to be the German car-maker flagship.

From the outside, the 1997 A 6 featured a rounded bodywork, with almost no flat surfaces on it. The rounded front end, with embedded headlights and curved surfaces were on the biodesign trend of those times. The greenhouse was like a wide arch over the five seat interior. Even the trunk lid was curved over the back of the car, despite the aerodynamically reasons to make it flat and straight. The design was more important than that detail.

Inside the cabin, there was a roomy interior with ample front seats. In the rear, due to the center tunnel, the middle seat didn't offer enough legroom. But it offered enough shoulder and headroom, despite its sloped rear. The car was offered with on-board computer an option for integrated telephone.

From the technical point of view, the 1997 A6 was offered with a big choice of engines, both diesel and gasoline between 1.8- and 4.2-liter. Depending on the versions, some were mated to a 5-speed manual while other came fitted as standard with a 6-speed manual. The 1997 model also offered a Tiptronic 5-speed automatic transmission. 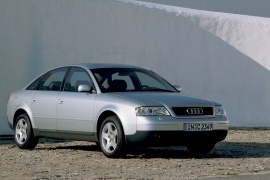