The second generation of the Audi A3 was introduced in 2003.

In 2008, along with the facelift, it introduced the open-top version for the car. It was a well-expected addition but at the wrong time.

Audi thought that it had enough convertible cars on the market. It already had the TT Roadster and the A4 Cabriolet. But there was a request for compact-sized cabriolet versions and the A3 seemed to be just right. Unfortunately, the 2008 financial crisis hit the automotive industry. But the A3 Cabriolet still managed to go on the market.

Based on a reinforced platform of the regular Audi A3, the Cabriolet version featured the same dimensions and the same design up to the A-pillars with the 3-door version. The beltline was kept the same but the trunk had to be modified. The taillights were different as well. The third stop-light was enclosed in the trunk-lid.

Inside, the car took some inspiration from the TT model, featuring similar four-vents and knee-pads on the center console. The instrument cluster featured red needles on a black background. The new MMI infotainment system was a carry-over from larger Audi sedans.

For the drivetrain, the A3 Cabriolet featured diesel and gasoline engines ranged between 106 hp and 200 hp. For the transmission, it was fitted as standard with 5- or 6-speed manual, or with the new S-Tronic (dual-clutch) gearbox with 6 gears. 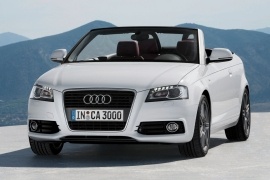 2 High Mileage Audi A4 Cabriolet May Play Games With Your Wallet, It Might Also Be Awesome