Limited to 200 units produced, the 2019 Aston Martin Vantage AMR was launched just a day before the penultimate round of the FIA Endurance Championship, the birthplace of the Vantage AMR.

Aston Martin had a long motorsport history before launching the Vantage AMR. It wasn't the only AMR ever built by the British car manufacturer. Previously, it built the four-door Rapide and the previous Vantage in 2017, and also the DB11. Unlike those, the 2019 Vantage AMR was available exclusively with a 4.0-liter twin-turbo V8 engine provided by Mercedes-AMG mated to a 7-speed manual gearbox.

On the outside, the look was enhanced with the addition of carbon fiber, which could be found on the front spoiler, the side exhaust vents on the front fenders, and the side sills. A carbon-fiber roof and mirror cases were noticeable, and, in the rear, a newly designed bumper that integrated the rear diffuser was also made out of carbon-fiber completing the overall look. A quad exhaust was present, instead of the regular, dual type.

Inside, the carbon-fiber fever was noticed on more elements from the dashboard to the center console. Apart from that, the interior was enhanced with the extensive use of the Alcantara. But the designers could have used an aluminum gear-lever knob instead of a plastic one. The AMR didn't forget about modern technologies such as an infotainment unit, or air-conditioning.

By using a manual transmission, a mechanical differential, and the extensive use of the carbon-fiber, the Vantage AMR saved about 200 kg (440 lbs) of weight. It also lightens up the braking system by using carbon ceramic brakes a lighter, 20” wheels. To help the drivers with the manual transmission, the AMR does the rev-match with up-shifting and downshifting. 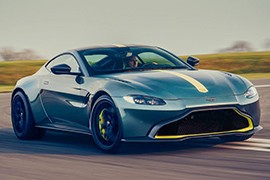 3 With Vettel Now Retiring from Formula 1, Who Will Take His Place at Aston Martin?