Aston Martin used all of its expertise and its Formula 1 drivers to develop their ultimate hypercar, the Valhalla.

The British carmaker learned its lessons when it worked on the Valkyrie supercar and applied it to the Valhalla, but it was an important difference between those two models. While the Valkyrie was a track-focused vehicle, the Valhalla had to cope well with the tracks and the regular roads.

They created the vehicle around a carbon-fiber tub with a mid-mounted engine. That led to a narrow and short front area, a greenhouse with a massive curved windscreen, and a carbon-fiber roof. Behind it, a snorkel-like air-intake allowed the air to get into the twin-turbo powerplant mounted behind the cabin. A carbon-fiber dual-wing that ensured up to 600 kg (1,322 lbs) of downforce onto the rear axle at the back.

Aston Martin created a minimalistic interior with a pair of sport bucket seats crafted in carbon fiber and thin padding. Between them, the center console hosted the buttons for the gearbox. In addition, the British carmaker installed a digital instrument panel in front of the driver and a squared-looking steering wheel.

The 4.0-liter V8 power plant featured a flat crankshaft for a better engine balance. The engineers paired it to an eight-speed automatic (dual-clutch) transmission. Worth mentioning that all eight gears were for forwarding. For reversing the car, Aston Martin employed the electric motor. The all-wheel-drive system featured an electric motor at the front and another one for the rear axle, which worked together with the 750 hp twin-turbocharged engine. 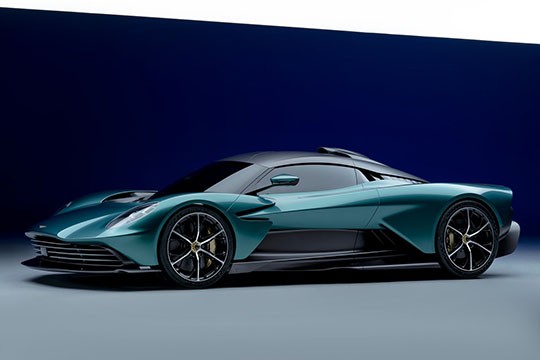