The new car was based on the DBR9 model - VH platform - but featured a lower and wider bodywork. It shared its wheelbase and roofline with the DB9 car and featured redesigned front bumper - with wider air scoops - and an integrated rear lip spoiler. The new DBS is expected to be quite a rare model among marque's enthusiasts, as Aston Martin will only produce around 300 units of this high-performance sports car. The DBS V12 was pulled in 2012, replaced by the new Vanquish (Project AM310). 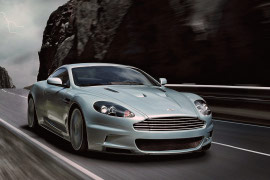