The DB9 was launched at the Frankfurt Motor Show in late 2003.

It was built on a completely new platform developed by Ford and its design was signed by two great designers: Ian Calum and Henrik Fisker.

The car came on the market after the DB7. Following the naming tradition, it should have been named DB8 but the car-maker was afraid that the customers will think that it had a V8 under the hood. Actually, it was a V12 taken from the Aston Martin Vanquish. It was the most performant car from Aston Martin's lineup and later on, it was lined-up in the FIA endurance championship.

The car was a step above the DB7 with a more aerodynamic look, but it still featured the classic Aston Martin “shell” grille. The raked A-pillars and the low-profiled greenhouse was extended in the back by a sloped rear windscreen. It was a supercar dressed like a GT vehicle.

Inside, the DB9 featured a luxurious interior covered in leather, aluminum, and wood. The latter was used in two places only: on top of the center of the dashboard and, as an option, for the door caps. The brushed aluminum pedals were part of the sporty image.

Like the Aston Martin Vanquish, the DB9 featured a 5.9-liter V12 engine. While the engine was in the front, the gearbox was in the back for better weight distribution. It was fitted with a standard 6-speed manual, but there was an option for a 6-speed automatic. 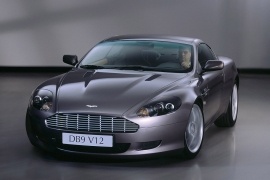