After successfully launched the DB11, Aston Martin prepared an upgrade for the car, offering more headroom in the DB11 Volante.

The open-top version of the DB11 just made the British GT car better. Since the carmaker didn't want to make the Volante a track weapon, it tried to make it comfortable and luxurious. It had to show its owner's value, and that's what the 2018 DB11 Volante did.

Aston Martin started the research for the open-top version at the same time as with the DB11 Coupe. Thus, it could make a car just slightly heavier than its fixed-roof sibling. The specific, shell-like grille on the front was a trademark for the British manufacturer. The headlights, instead, were different than what Aston Martin used to do before. A double-curved line and swept-back lenses enhanced the dynamic shape of the car. With the top down, only the A-pillars raised above the car's beltline. The vehicle needed just 14 seconds to open and 16 seconds to close the roof at speeds of up to 50 kph (31 mph).

With the DB11 range, the British carmaker said goodbye to Ford's older buttons and stacks. The DB11 Volante featured a new design for the center stack, which sported an infotainment screen on its upper side. A touch pad, somehow similar to the one found in some Mercedes-Benz vehicles, appeared on the center console. A large, centrally mounted tachometer with a digital display in the middle for the speedometer took the older analog dials' place on the instrument cluster. Two additional screens flanked the center dial.

The DB11 Volante was available with a 4.0-liter V-8 engine developed by Mercedes-AMG. Aston Martin paired it with an eight-speed automatic transmission. 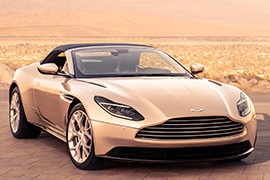