Designed by Henrik Fisker and powered by a Volkswagen engine, the Artega GT was a two-seat sports car that could stand side-by-side with other supercar heroes of its times.

Klaus Dieter Frers dreamed about a mid-engined German sports car that could stand proud against other supercars and be proud of its achievements. Thus, he established the Artega brand in 2006 and announced the first product at the 2007 Frankfurt Motor Show. It was the year when the world financial crisis was about to wipe-out big brands. A small carmaker such as Artega had no chance. Herr Frers waited for better times and introduced the Artega GT in 2009.

Its design was made by the same hand that drew the Aston Martin DB9, BMW Z8, and Fisker Karma lines. The Artega GT's fluid lines started with a narrow front end, two big headlights, and curved front fenders. Its arched A-pillars and the arched roof allowed a smooth airflow toward the sloped rear window. On the sides, behind the doors, the car sported a big air intake on each rear fender, feeding the engine.

Inside, there was much inspiration from Audi on the dashboard's shape and vents, but the rest was all original Artega GT. Inside the instrument cluster, a big dial took center stage. Its upper half showed the revs, while the lower half displayed the speed with analog white needles and white lettering. The sport-bucket seats with high bolstering promised excellent side support while cornering. With its leather-wrapped interior and piano-black trims, the sportscar meant business.

The engine was placed behind the cabin. It was a Volkswagen-sourced V-6 with a 3.6-liter displacement that provided 300 hp. It was paired exclusively to a six-speed automatic gearbox from Audi but with Artega's shift software. 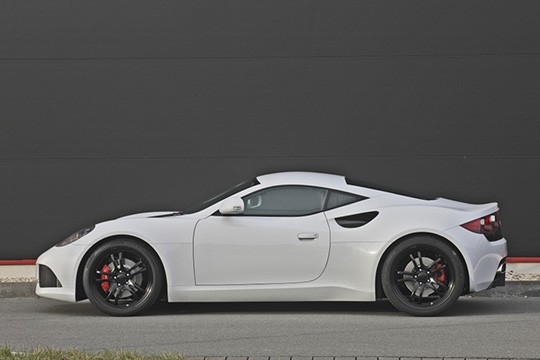