Following the successful 1999 Ariel Atom, the British carmaker considered that the car's frame could provide more excitement with a proper engine, and that's what it did.

While the first generation of Ariel Atom started based on a student project, the second generation was a different job. The car manufacturer took the same space frame that defined the roadster and brought a few updates.

The car's exterior looked similar, with its side ladder-type exoskeleton already produced for the 1999 model. Ariel focused on other parts, including a pair of transparent bubbles in front of the seats, which diverted the airflow over the occupants. However, they still had to wear a helmet. Behind the open cockpit, a Formula 1-inspired hunchback featured a grille on the upper side for the engine's intake.

Ariel installed two thin, carbon-fiber seats carried over from the racing industry. They were road-legal but with minimum padding and maximum bolstering. Keep in mind that the Atom could hold lateral g-forces of 1g, and the driver or its passenger shouldn't slide out. In the instrument panel, the car manufacturer placed an LCD that displayed the speed and other relevant information regarding the engine or the car.

Behind the cockpit, Ariel dropped the 1.8-liter Rover K-Series engine and installed a 2.0-liter Honda K-series engine from the European Civic Type-R. To spice up things, the carmaker offered a supercharged version of that engine resulting in a 100 hp increase when compared to the naturally aspirated unit. 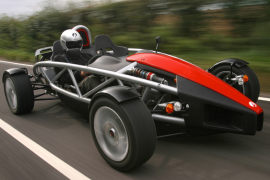