The extremely light Ariel Atom was the roadster that shook the supercar world with its amazing acceleration times and high cornering speeds.

Ariel took the light-weight concept to a different level. The British car manufacturer built a space-frame construction and added only what was mandatory on it, and everything started with a student project made for the Coventry University, in 1996, by Niki Smart, who later on became an exterior design manager for General Motors Advanced Design Team.

Smart built the concept with an exoskeleton design. The construction was inspired by the air industry. The designer added a nose-cone to improve the aerodynamic and protect the driver from winds. There was no windshield (although it was later on added as an option). Its headlights were barely visible between the wheels and the car's nose. In the back, the car manufacturer installed the taillights directly on the chassis. Everything was exposed to the wind: the engine, gearbox, suspension, and, of course, the driver. There were no doors nor a roof.

The driver sat on a very slim seat built as thick and heavy as the rules required, but they featured high-bolstered areas so the driver wouldn't slide out during high-speed cornering—the car supporter lateral accelerations of over 1 g. The instrument cluster featured two dials for the speedometer and tachometer and an LCD at the bottom.

In the beginning, the car was powered by a 1.8-liter Rover engine. Later on, the carmaker added more engines version, with the Honda Civic Type R K20 unit being the best known, especially with a supercharger on it which gave the Atom a 600 hp/tone ratio and a 0 to 60 mph (0-97 kph) time of just 2.9 seconds. 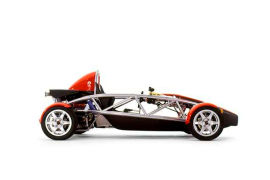