In 1975, Alfa Romeo started to offer a station-wagon built on the same platform as the Alfasud and named it Giardinetta.

Three years later, the Italian carmaker introduced a facelifted version, following the same trend from the Alfasud range. While it was known as a sport-car company, Alfa Romeo didn't want to lose the Italian Government's money, and they had to build a car for the masses. The Giardinetta was a perfect match between a sporty coupe and a station wagon.

Back in the '70s, the name "facelift" was nonexistent yet, but the Alfa Romeo management knew that the car needed a refresh. The designers worked on the front fascia by installing new headlights with rounded edges. Its long cabin that hosted the rear seats and a larger trunk remained unchanged.

Inside, the Giardinetta carried over most of the Alfasud features, including the front's bucket seats. In the rear, the carmaker installed a bench with a flat-folding seatback. Thus, it transformed the trunk into a large loading area. It was an excellent car for small merchants.

Since Alfa Romeo made the car to satisfy everyday needs, the carmaker didn't install powerful engines on the Giardinetta. It offered it with a choice of two engines that provided 68 hp and 71 hp, respectively. Both versions were paired to a standard 5-speed manual and sent the power to the front wheels. 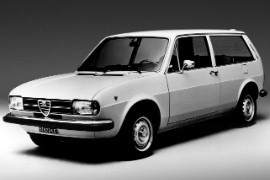