Five years after the successful introduction of the first front-wheel-drive Alfa Romeo in 1972, the Italian car-maker decided that it was the time to refresh the range.

There was more than a profit story with governmental money. It was a success tale for those who found a workplace in the Southern part of Italy, an area where the unemployment rate was high. The Alfasud was one of the pillars that saved the country from an economic disaster.

Back in the 70's the name "facelift" was nonexistent yet, but the Alfa Romeo management knew that a refresh was needed. The designers worked on the front fascia by installing new headlights with rounded edges. The Alfa Romeo shield was chromed in contrast with the black radiator grille. The car was also known as the Alfasud Super, and its smoother lines showed a better quality on the assembly line. Since the original model was designed by Giorgetto Giugiaro, it was the same company that helped Alfa Romeo to refresh the lines.

The interior was enhanced, and the materials used were plastic, rubber, and metal. The man-made leather seats were on the options list, while the standard versions featured cloth upholstery. But most of the interior was carried over from the non-facelifted version.

Under the hood, Alfa Romeo installed new bigger engines that offered more power. The 1.2-liter unit from the non-facelifted version was kept, but a new 1.3-liter and a 1.5-liter were added to the lineup. 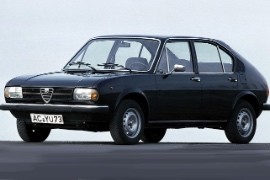 2 One-of-Two Alfa Romeo Alfetta GT GR.2s Still in Existence Is Up for Sale