The Alfa Romeo Alfasud was the first front-wheel-drive hatchback built by Alfa Romeo.

It was the biggest commercial success for the Italian company for more than a decade.

The Alfasud was a challenge for the Italian car-maker. On the one hand, it tried to get more customers. On the other hand, it was a governmental program to decrease the unemployment rate in the South part of Italy. For that, a new factory was built in the Campania region. The result was one of the most successful Alfa Romeo in history. Since it was the Alfa built in the South, it received the name Alfasud (Alfa from South).

The small hatchback was designed as a practical vehicle, good for a family. The rectangular headlights were preferred. Due to a relatively tall greenhouse, the car was good to fit up to five adult passengers inside. The car was designed by Giorgetto Giugiaro from ItalDesign. Its look was appealing. The boxer front-engine allowed a narrow front and the raked-back led to a very good aerodynamic coefficient. Its design was a decade ahead of its time.

The interior was basic, with plastic, rubber, and few metal trims here and there. The idea was to keep the car's price low. There was enough room for four adults, without any problems for the headroom or legroom. Since the engine was flat and low, the front overhang was kept short and the wheelbase was big for the overall size. Despite the hatchback look, it featured a separate trunk that was opened without the rear windscreen.

For the engines, the Alfasud was offered with a nimble, 1.2- and 1.3-liter engine, which offered 63 hp and 68 hp respectively. They were mated to a 4-speed manual. 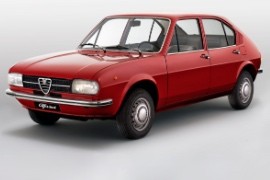