With new management and ownership, the British brand AC tried to survive on a market that plunged again into recession and introduced a coupe version for the AC Ace named Aceca.

After creating the Ace, also known as Brooklands Ace, the AC carmaker already had the tools and the recipe for building the car. The management came with the idea of creating a 2+2 coupe based on the same stainless-steel chassis and same underpinnings provided by Ford.

Unlike its roadster sibling, the Aceca featured two slim, horizontal headlights in 1998. In late 1999 though, the carmaker made an updated version with glass-covered, flush to bodywork headlights. While the main proportions remained similar to the roadster, most body panels changed from the A-pillar rearwards. Its closed cockpit featured a rounded greenhouse with a sloped window area above the trunk. A duck-tail ended the cabin above the rounded taillights from behind.

Inside, the carmaker managed to squeeze a bench for two at the back, while the front occupants were pampered with the same room as on the roadster. The British manufacturer chose not to lower the car's price and fitted it with a leather-clad interior. On the center stack, it placed the AC-control unit and a CD player. Since it was considered a GT vehicle, it sported luxurious items such as standard power windows, heated windshield and mirrors, plus wood trims on the dash and the center console.

Under the hood, depending on the customers' options, the Aceca was offered a choice of three engines ranging between 3.5- and 5.0-liter. A five-speed manual was featured as standard, while a four-speed automatic was available as an option. 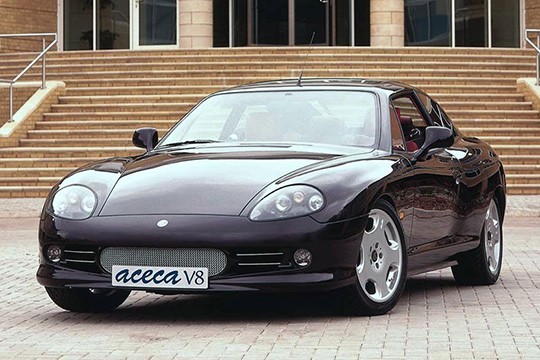