The Frua 428 Coupe was the best of three worlds, with an Italian design, a British chassis, and a big, American V-8 under the hood.

By 1966, AC was already a respected name in the motorsport arena, and the AC Ace Cobra was not the only reason for that. The Aceca was also known and, thanks to its new chassis and suspension system, was even better.

While the Pininfarina, Zagato, Ghia, or Bertone were already big names in the automotive design, Peter Frua was less famous. He managed a few successful bodyworks for Glas and Maserati, but the AC Frua was perhaps its masterpiece. AC built a long wheelbase Cobra chassis, and Frua installed a fastback coupe bodywork. The round headlights were carried over from the Ace model, but the slim front end, the chromed bumper, and the corner-mounted turn-signals were unique for the AC range. He installed a fuel-flip on the rear pillar, on the right side of the car. The sloped tailgate sported a big windscreen.

Inside, the design was ahead of its time, with a full dashboard in front of the driver, filled with gauges and dials. Yet, the car was more of a grand touring model than a sports car, but it could compete against any Ferrari from that era. Frua designed the leather-clad sport bucket seats for comfort.

After completing the bodywork, Frua sent the vehicles back to the U.K. so AC could install the drivetrains and other components. Ford provided the big-block 427 V-8 engine to power the coupe, and the result was an astonishing, super-fast car. Thanks to its longer wheelbase and the improved MK III platform, the Frua was a much comfortable ride than the AC Cobra. 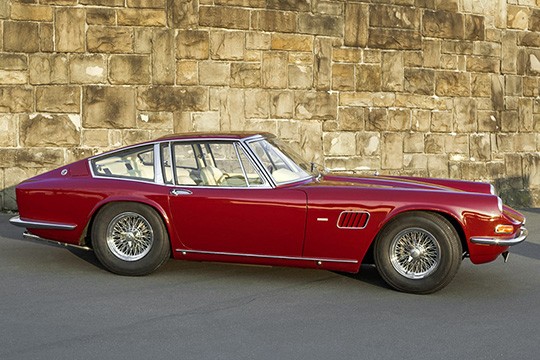