Home > Reviews > LOTUS
BODY TYPE: Luxury
For more than 70 years, British marque Lotus has helped the world of sports cars become as appealing as it is today. Since 1948, car names like Elise, Exige and Evora have played their part in defining the segment and writing automotive history.
22 photos

Over the past decade or so Lotus, however, has been absent from the scene due to a variety of factors. But in July 2019, the nameplate returned, and by the looks of it this time it is here to stay.

In July, Lotus unveiled the Evija, a model and a nameplate meant to challenge preconceptions and steer the carmaker on a new path. The Evija is the first car Lotus has built since being taken over by Chinese company Geely, and at the same time the brand’s first electric vehicle.

Lotus calls the Evija “the first all-electric British hypercar, the most powerful series production road car ever built” and “the most dynamically accomplished model ever built.”

For all intents and purposes, the car is all of the above, and then some. 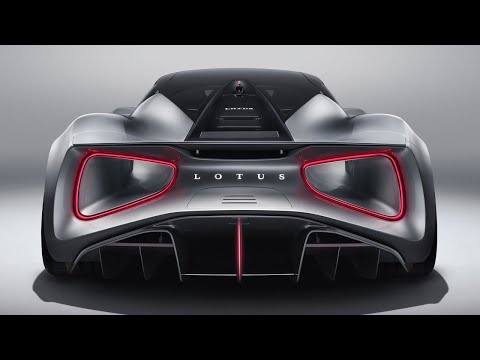 The new Evija is meant to represent a new direction in design for the British, one that is “contemporary” and that will probably be visible on other future Lotus models as well.

Despite going for a more contemporary approach, Lotus cannot forget its roots, so elements inspired by previous models are seen here and there on the body. So is the case with the bonnet, for instance, shaped to remind the viewer of classic Lotus road and race cars.

The Evija is the first Lotus road car to use a one-piece carbon-fiber monocoque chassis on top of which a full carbon fiber bodywork was fitted. That makes the car tip the scale at just 1,680 kg.

The hypercar distinguishes itself with several exciting design cues. At the front, there’s a bi-plane front splitter in three sections, with the larger one meant as an air intake to cool the battery. The outer sections, intended to be reminiscent of the ones of the Type 72 Formula 1 car, use the air to cool the axle.

Riding just 105 mm off the tarmac, the Evija looks not unlike a Le Mans race car thanks to the Venturi tunnels which pierce each rear quarter.

These tunnels are functional as well, as they are meant to direct the airflow through the body. At the rear, where they exit the car, the tunnels are edged by red LEDs that look like the afterburners on a fighter jet.

The car’s active aerodynamics include a rear spoiler and an F1-style Drag Reduction System (DRS). These systems kick in automatically when the vehicle is in Track mode, but they can be activated manually whenever required.

The Evija was designed to be as streamlined as possible. It lacks exterior mirrors, using instead cameras fitted into the front wings and a third one on the roof. The images they capture are relayed on three distinct screens on the inside. Not even the CCS2 charging socket can be seen, as it is hidden behind a vented flap at the rear of the car.

For access to the interior, the Evija is the first car made by Lotus that uses dihedral doors.

As with any hypercar, the Evija too can be personalized in a variety of ways. One of the most interesting options is the possibility of changing the standard Union Flag badge on the C-pillar with another flag, a family crest, or personal logo.

The interior of the Evija is a bit unlike what you would expect from a car of this caliber.

The conventionally located steering wheel is similar in shape, size and functionality to the one found in an LMP or F1 car, with the ring finished in Alcantara leather. In front of the steering wheel is the driver’s seat that, just like the one for the passenger, is in fact a carbon fiber shell hand-trimmed with thick Alcantara.

It is the minimalist dashboard of the car that gives it the unique feeling. There is no screen in the center, and the dashboard spits a floating wing toward the rear of the vehicle that acts as a center console. On this protruding element, Lotus fitted the controls for phone use, cruise control, and DRS deployment.

Befitting such a car, carbon fiber is used extensively throughout the cabin, complementing the use of leather.

The single screen of the car is located behind the steering wheel. It shows information about driving mode, battery charge or range, aside for the usual info about speed and other telemetry data.

The car’s infotainment system is Apple CarPlay and Android Auto compatible, and it features a modem for an Internet connection. This way, drivers can monitor their car from anywhere, checking info such as battery status and range, but also allows remote control over the air conditioning.

Another way of interacting with the car is the center console that features touch-sensitive haptic feedback buttons and a control wheel.

For racing lovers, the Evija ships complete with a chronograph that can be used to record lap times.

The most exciting aspect of the Evija is, of course, its electric powertrain. The first-ever such technology used in a Lotus car has been developed together with Williams Advanced Engineering, a big name in electric car racing for several years now.

The powertrain consists of a 70 kWh lithium-ion battery located immediately behind the two seats and four e-motors that combined develop an astonishing 2,000 PS of power and 1,700 Nm of torque. That’s enough for naught to sixty acceleration time of under three seconds and top speed of over 200 mph (322 kph).

The battery of the car, visible through the glass rear screen, can be recharged to 80 percent capacity using a 350 kW plug in 12 minutes. Lotus says it is talking with charging solutions suppliers to come up with the best hardware for its customers. The estimated range on a single charge is 250 miles (402 km).

Depending on the immediate goal of the driver, the powertrain can be made to operate in one of five driving modes: Range, City, Tour, Sport, and Track.

The main thing Lotus had to be very careful about in designing the high-performance Evija was the integrity of the battery. To ensure that, the carmaker fitted a four-radiator cooling package to keep the temperatures low.

The car’s road handling is improved with the help of an ESP system and an electro-hydraulic steering system. Bringing the car to a halt is an AP Racing braking system with carbon-ceramic discs front and rear.

The Evija is a massive bet for the British brand. In its 70 years history, Lotus was faced with near extinction several times but managed each time to come back from the brink. Evija is just the latest tool for its salvation.

The Evija name marks a series of premieres for the brand. It is the first hypercar wearing its logo, the company’s first electric model, and the first one to be launched since the Geely takeover. After it, several other exciting new models will follow.

As with any hypercars, a limited number of Evijas will be built, namely 130. The number was chosen to celebrate the car’s project code, Type 130. Each will sell for £1.7m plus duties and taxes ($2.07 million).

Production of the Evija is scheduled to begin in Hethel, the UK, in 2020.
More reviews: