Home > Reviews > GENESIS
CAR SIZE: mid-size
BODY TYPE: Luxury / Crossover
In the first month of 2020, South Korean luxury brand Genesis came through on a promise it made at the 2017 New York Auto Show and introduced its first-ever SUV. Called GV80, the car is expected to bring more customers to the nameplate, but also usher in the new decade of car manufacturing.
6 photos

The GV80 is of crucial importance for Genesis, not only through its status of first SUV, but also because it is the platform chosen to introduce an entire array of never-before-used technologies. In fact, if it is something this car excels at, is the level of high-tech gizmos and features built into it.

Designed by Hyundai’s international teams in South Korea, the U.S. and Europe, the GV80 is described as “the essence of the innovative spirit of Genesis.” A car that should look just as luxurious as the others in the range, but bring that extra something only an SUV could bring.

In theory, the GV80 was designed to blend in perfectly with the other cars sold under the Genesis name. Yet several of the car’s design features are new, and part of a new design philosophy that should be more visible in the coming years on other models as well.

The most important of these styling cues is the way in which the headlights have been drawn. Called in Genesis speak Quad Lamps, they comprise all the forward lighting needs of the car, shaped not unlike the ones fitted on the concept car of three years ago.

In between the Quad Lamps Genesis fitted a large – the carmaker actually uses the term monumental – Crest Grille. Together, the grille and lamps should “become the most recognizable, unique signature of Genesis design” in the near future,

The luxury SUV will hit the market with a wide range of customization options (there are, for instance, a total of 11 exterior colors) but it will also be offered built-to-stock. 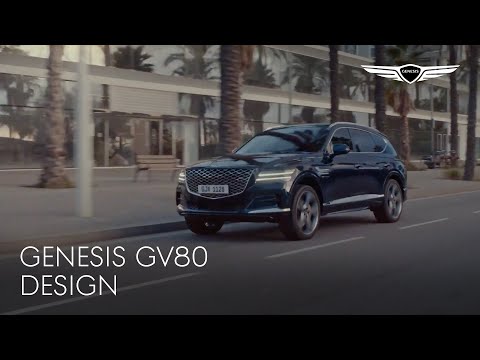 Like any other Genesis car, this one too is meant for the luxury segment, and that becomes obvious as soon as one steps inside. Leather and other soft materials cover all the surfaces, the design is simple and elegant, and there are tons of features that instantly show this is an SUV for the 21st century.

The seats both in front and at the rear are heated and ventilated. The one the driver sits in comes with seven air cells, meant to reduce “fatigue from long hours of driving.” Also contributing to the well being of the people inside is an air purification system capable of detecting in-vehicle dust and respond accordingly.

As we said above, if there’s anything that stands out when it comes to the GV80 is the great number of high tech-gizmos it was fitted with. Starting with the 14.5-inch, split-screen of the infotainment system and ending with the CarPay feature, the SUV is far ahead of many of its competitors.

For instance, the car comes with a handwriting recognition system. That means that instead of touch-typing a destination on a virtual keyboard, all the driver has to do to let the car know its heading is use the integrated controller and actually write, by hand, the address, or even phone numbers.

Then there’s the augmented reality navigation that uses a front-mounted camera to capture images of the road ahead and overlay on it the optimal driving path.

Thanks to a technology called Road-Noise Active Noise Control (RANC), Genesis says the passenger will rarely be disturbed by sounds coming from the outside. RANC is a system that does not rely on hardware or physical alterations of the interior to work, but it rather generates sound waves of opposite phases to those coming from the outside to nearly cancel them out.

For a number of months starting January 2020, the first Genesis SUV is available with only one powertrain, exclusive to this nameplate: a 3.0-liter six-cylinder that develops 278 ps of power. When fitted on the five-seat model with 19-inch wheels and rear-wheel-drive, It has a fuel consumption figure of 27.7 mpg.

Later on, more engines will be added to the range, starting with two turbocharged gasoline units.

The materials used in making the body of the GV80 were chosen to both help reduce weight and protect the occupants in case of need. The main structure of the car is enforced with hot-stamped high-strength steel, while aluminum was used for the doors, hood, and tailgate.

Being meant as an off-roader just as much as an executive car, the SUV features electronically controlled suspension. But not just any such hardware, but enhanced with the inclusion of a camera and a software capable of detecting the road ahead and respond accordingly.

The wide range of ADAS systems – there is nearly no such tech on the market that was left out of the GV80 – is complemented by a total of ten airbags, including one mounted between the front occupants.

In case of a malfunction, the car comes with real-time remote diagnosis and remote overview of the car and its surroundings.

The Genesis GV80 launches in January 2020 for customers in South Korea. The car will be later in the year head for other markets as well.
More reviews: