Home > Reviews > PORSCHE
BODY TYPE: Coupe / Luxury
Traditionally, Porsche is not adding new car models to its range as often as some other carmakers do. But in the rare instances that happens, the results are spectacular.
33 photos

Just a few days before the start of the Frankfurt Motor Show in September 2019, Porsche finally pulled the wraps off the Taycan, the Mission E-based electric car meant to take the carmaker into the new era of motoring.

Shown as a bridge between the past and the future, the Taycan is powerful enough to wear the Porsche name proudly, has performance specs just as impressive as any other Porsche, and enough of a range to instantly cure any type of range anxiety.

The Taycan is a brand new model in the Porsche lineup, meaning there was nothing to build on in designing the car. Yet, using the Mission E as a starting point, and the carmaker’s usual design language, Porsche managed to come up with one of the best looking EVs now on the market.

Built as a four-door sports saloon, the car rides on a wheelbase that is 2,900 mm long. Its external dimensions are 4,963 mm in length, 1,966 mm in width and 1,378 mm in height. These proportions, says Porsche’s head of style Michael Mauer, are unique.

By that, he means the Taycan is lower than your typical electric car, despite using the same configuration (battery in the floor) as all others. This was made possible by using so-called foot garages (detailed in the Interior Design section below).

The streamlined body of the Taycan, with overall lines reminiscent of the Porsche tradition, but with an entirely new front end, allows for a drag coefficient measured at 0.25. 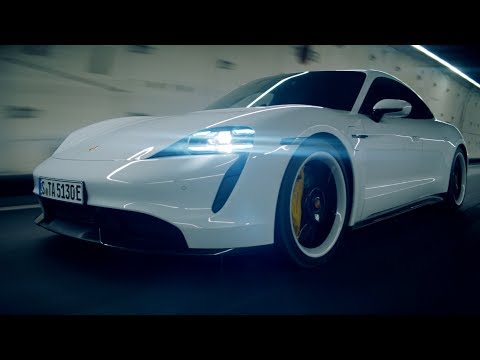 In the Taycan, Porsche went nuts and for the first time dropped the use of leather. Instead, the carmaker uses recycled polyester fibers to complete the picture of a sustainable and eco-friendly car.

But that’s only on one version of the interior, as the available personalization options will allow for the fitting of leather just as on other Porsches.

The car’s interior looks not unlike a spaceship bridge depicted in sci-fi movies and books. The wide dashboard is filled with screens, starting with the one used as an instrument cluster and ending with the optional one for the passenger. All screens are located behind an integrated glass band in a black-panel look.

The center console, adorned by another large touchscreen, swoops down from the dashboard and heads between the seats, while ambient lighting shines in the doors to complete the unique feel of the car.

There are two steering wheel variants available, basic and GT, and the power button is located on the left behind the steering wheel.

At the rear, the most noticeable features are the foot garages. They are in fact recesse in the rear footwell that allow passengers in the rear to sit lower than they would usually have sat, and feel comfortable even with the low height of the car.

Having dropped the use on an internal combustion engine, the Taycan comes with two luggage compartments. The one in the front can hold 81 liters, and the one in the rear 366 liters.

The phrase that best describes the gadgetry that comes with the Taycan is high-tech. Lots of screens and advanced systems are likely to make for a unique driving experience in this car.

The car’s instrument cluster is, in fact, a 16.8-inch curved screen that can be personalized in one of four display modes, each with its unique features: classic, map, full map and pure. At the edge of this screen, there are touch-control fields for the control of lights and chassis functions.

Aside from using the fingers to control the screens, drivers can also use their voice, by calling out Hey Porsche. A direction selector switch is present in the instrument panel.

At the center of the dashboard sits a 10.9-inch infotainment display, and a third screen is optionally available for the passenger side.

At first, the Taycan will be offered in two versions. As usual, these are the top versions of the line, controversially called Turbo and Turbo S. Less powerful variants, including the Taycan Cross Turismo, will enter the range starting later this year.

For now, the entry-level is the Turbo, whose two electric motors mounted front and rear develop 625 ps. Using an overboost function with launch control, power levels rise to 680 ps, enough for an acceleration time of 3.2 seconds.

The more powerful Turbo S develops the same amount of power (625 hp) but can squeeze enough extra from the overboost to get the total level to 761 hp. It’s acceleration time is rated at 2.8 seconds.

The Taycan is the world’s first production EV that uses an 800 volts architecture instead of the usual 400 volts. That means it can support high continuous powerful charging time and needs only 22 minutes to reach 80 percent capacity.

The car’s two electric motors are controlled by a two-speed transmission fitted on the rear axle. The first speed is used to give the Taycan more acceleration from a standing start, while the second is to be used during sustained drives.

Additionally, there are four driving modes available: range, normal, sport, and sport plus. All of them are four-wheel drive, except for the range, which only uses the rear motor.

The Taycan is planned as one of the most high tech cars the Germans have ever launched. It packs a wealth of safety systems that makes it aware and helpful, making driving as easy and as safe as possible.

The car sees ahead and behind using radar systems, a number of cameras (including wide-angle and night vision) and ultrasound sensors.

On the Taycan’s chassis, Porsche deployed a networked control system called Porsche 4D Chassis Control. It is used to analyze all of the car’s systems in real-time and synchronize them accordingly.

That means hardware such as the adaptive air suspension with electronic damper control, for instance, works to complement the electromechanical roll stabilization system.

At the moment, Porsche is enjoying some of its best years. The cars it makes are at the top of the sales charts, and the nameplate is getting perhaps more exposure than ever.

Some have claimed the Taycan is the most anticipated electric car of modern times. Although it lacks any direct competitor at the moment, the Taycan has already sent shivers down the spines of companies selling EVs, especially Tesla.

Even before the car was shown publicly, in excess of 30,000 people have expressed interest in buying one. That’s a huge number for Porsche, and a clear sign that the wait for its first EV was worth it.
More reviews: